Indeed, we have made it. It's really happening. In 4 short weeks I am headed to Chicago to meet up with loyal blog-followers Fu, Des and Jenni. I am so very excited to spend a weekend watching our favorite episodes, reminiscing about the good old days of Alias (or TV in general) and actually SEEING each other in real life. And again, another thank you to all who made and still make this blog what it was and still is- a place for smart people, who enjoy smart TV to talk. I have a feeling that there will be a lot of that happening once I arrive in Illinois. Stay tuned!!
Posted by Girlscout at 8:28 PM 1,115 comments:

Nearly 9 years ago I started this blog as a place to chat about intelligent TV. The ABC message boards were a mess with lackluster fans who couldn't even wrap their brains around JJ's Alice in Wonderland references. We needed a forum where we could come discuss the very literary parts of Alias and of course all the kick-ass fight scenes. During the last 9 years, I have made friends with many of the blog followers- one even flew to Seattle and stayed with me for a few days on a layover to Canada. There are some I still chat with regularly and one I would even call one a very dear friend (though we have never met in person). This coming spring, we have planned a little reunion of sorts. I plan to fly out to Indiana and spend the weekend knee deep in CIA missions with Sara Fu, Des and Jenni! I could not be more excited about this trip- finally able to meet face to face, after all this time and experience Alias together, like we did in the beginning. The tentative plan is to watch Season 2, from the demise of SD6, thru Season 3 and the demise of Lauren Reed. Because of course, it will capture the rise and fall of Syd and Vaughn's relationship, the return of Will, a little double agent business and much more. I think it will be the perfect refresher for everyone. I want to give a special shout out to SRM who has been holding down the fort for the last 8 years or so, keeping this little blog going! And to Page48 and Uncle 111 for being the most loyal followers. Your ideas and conversation are what made this blog what it was and is and will continue to be... a safe house for the Alias intrigued. 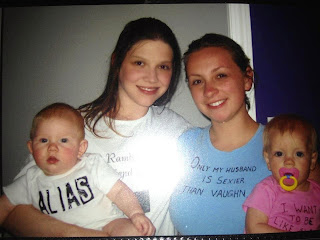 This is Fu, holding baby Asher (who just turned 9 the other day!!) and Des, holding baby Tori. So excited to see them!!
Posted by Girlscout at 9:51 AM 221 comments: 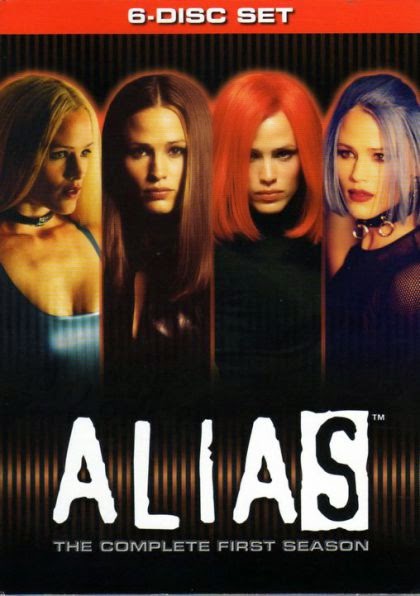 Our friends here at LTA had the fun idea to do a series rewatch. I wish I had time to do it with y'all (6-month old baby will do that to ya), but I wanted to give a new post for such a forum and say, enjoy!! I personally have watched the series back-to-back at least 3 times through with some extra watchings of my favorite seasons (1-3). Just don't do it on Netflix where the music is all wrong. ;-)
Posted by SRM at 1:37 PM 121 comments: 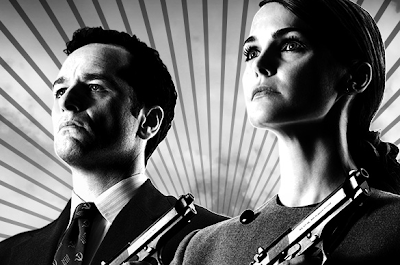 Well…sort of. In "The Americans" on FX both the husband and wife are KGB spies posing as a regular ole American couple in the 1980's. I heard about this show and was instantly intrigued given Jack and Irena's story in Alias. I also found it amusing that J.J. Abrams' darling Keri Russell plays the wife, which, after seeing her short-but-stellar spy performance in Mission Impossible III, I have no doubt she can pull off.

I haven't watched the show yet, but thought y'all might be interested. The show premiered on Jan. 30, but you can catch up online. If you have seen it, what do you think?
Posted by SRM at 6:18 AM 546 comments:

I was able to watch the first 2 episodes of Homeland, season 1. They were edited for On Demand, but it didn't take away from the story at all. I have a love hate relationship with Actor Damian Lewis. I have watched him in a couple series (The Forsyth Saga, Life)and I just had a hard time liking him. But he is perfect for this part. He is Nicholas Brody. He has this hidden anger, this awkward intensity that plays so well in this role. In the first episode, I was having a hard time believing Claire Danes as a CIA officer. She's always played these rather mousy, insecure characters and this woman, Carrie Mathison is one feisty little thing. She's willing to break all the rules, and I like that. I like it a lot. I'm only on the second episode of season 1 and I can tell you, I am already over Jessica Brody. MEH. She's annoying. Anyone agree? I feel like the storyline between her and Nick's best buddy Mike has already been done. It's to be expected, in a show where nothing is suppose to be as it seems. I am loving the premise for this show. I love play between Danes and Lewis, though they rarely do a scene together. I love Actor Mandy Patinkin, who plays Saul, Carrie's somewhat adviser and friend. He is great in this role and the danger, not only dealing with terrorists, but the defying the country you work for, has made for some interesting twists. I'm hooked. I might need to just order Showtime. Ha. Thoughts?
Posted by Girlscout at 7:49 AM 114 comments:

Thoughts? I just saw the promo commercial for this submarine-based, government conspiracy program. I think I may watch. Scott Speedman, 'nough said. He was JJ's very first "Vaughn." Love.
Posted by Girlscout at 7:56 PM 21 comments:

Is there a revolution? 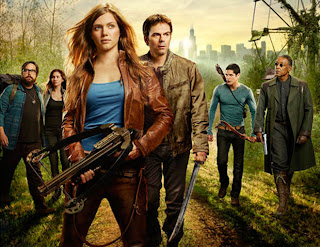 I know that ABC's new series Revolution isn't a part of the spy-genre, but I thought I would throw another interesting topic on the fire. I've seen this sort of revolution or movement of sorts in television lately and I would love your thoughts. We've seen huge blockbuster movies create small screen copycats, writers, producers, directors, actors, feeding off the body of movie that hit it big. For instance, when the Twilight books and movie series came out, all the sudden there was anything and everything vampire. Shows like Vampire Diaries and True Blood have hit it large on the coat tails of one simple idea- fanged day sleepers. This concept hit me last night as I watched Revolution. I began seeing bits of Hunger Games- this young girl, bow and arrow in hand, fitting off militia, living in a District-like republic. Charlie is showing a little bit of Katniss Everdeen, and I'm not mad about it, but it feels familiar. The post-Apocalyptic premise has been done before, but with other series, like Walking Dead (which I am obsessed with by the way) it seems like the end of the world is rather interesting to viewers. My question is, when is enough enough? When are we going to get sick of the vampires and zombies and the wars, diseases and loss of electricity that end society as we know it? How do you think Revolution fare in prime time? Did you watch?
Posted by Girlscout at 7:31 AM 8 comments:

This site was previously dedicated to all things Alias, the ABC spy series featuring Jennifer Garner. Today, the site is a safehouse for all shows focused on the international world of espionage. Welcome. Now let's get talking...